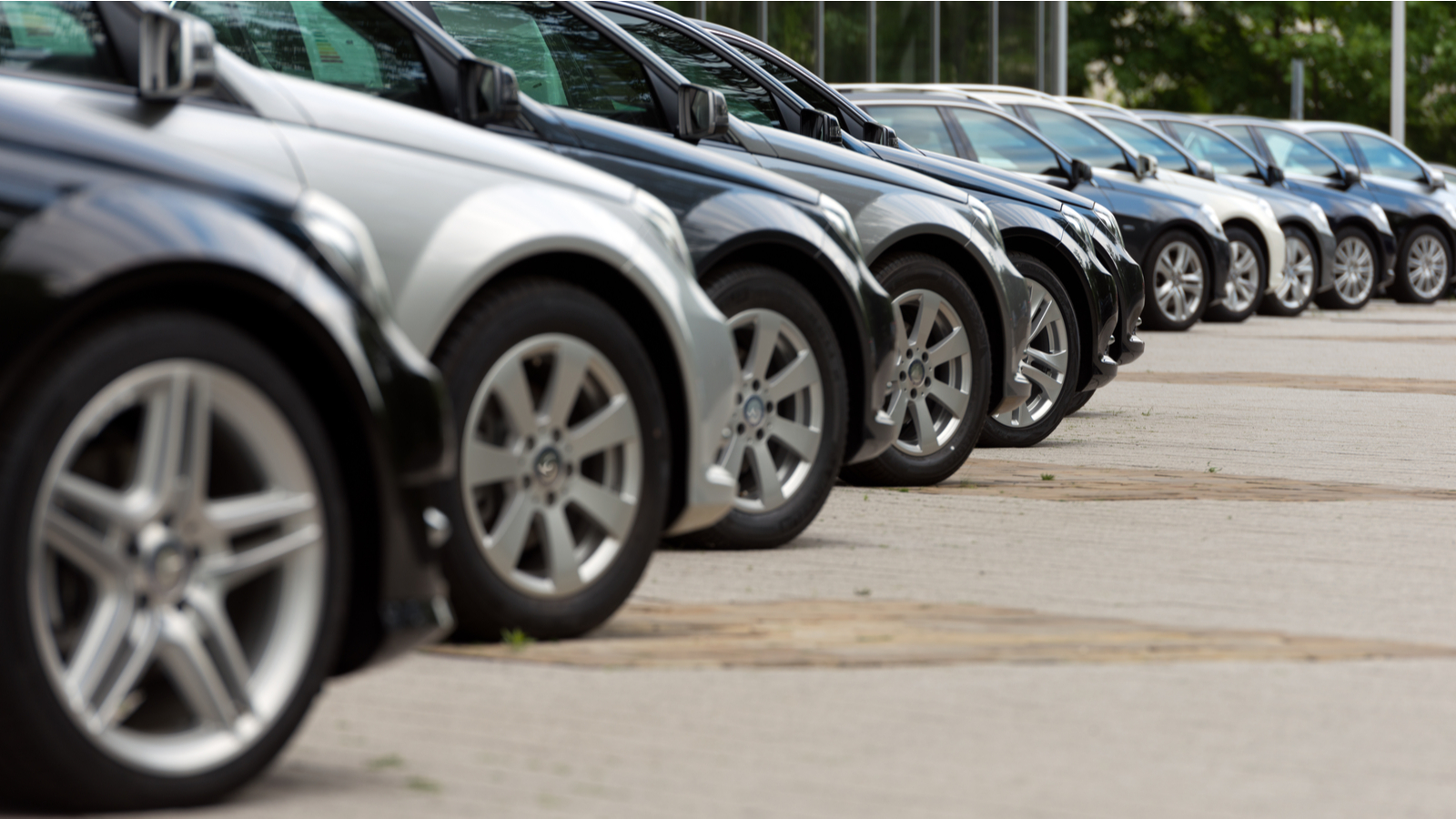 Car stocks, especially shares of electric vehicles (EVs), have turbocharged portfolios in the past year. Meanwhile, the auto industry — which increasingly relies on semiconductors — has been in the limelight.

However, due to the current chip shortage, many car makers have announced they would be temporarily halting production. As a result, car stocks have come under pressure. And therefore, this article introduces seven car stock to sell in the short run.

Semiconductors are found in a wide range of products in computing, autos, telecommunications, military systems, gaming and healthcare. Chips are typically behind most technological innovation. But the semiconductor industry is cyclical. During periods of high demand, upturns occur. The pandemic has meant increased sales in consumer items that have now translated into supply shortages.

Business cycles also impact auto sales. When the novel coronavirus hit our shores about a year ago, shares of car makers tanked. But as weeks passed by, the sentiment on Wall Street improved and many of them hit record highs.

In the short run, the chip crisis might curb growth and lead to profit-taking in share prices of car companies. Nonetheless, in the long run, legacy automakers are likely to perform well. Those businesses that create robust cash flows will come out of the impact of chip shortage without much long-term damage.

With that in mind, here is a list of seven car stocks that are currently feeling the heat of the chip shortage:

Now, let’s dive in and take a closer look at each one.

Our first stock is Dearborn, Michigan-based Ford Motor. The company manufactures a full line of Ford cars, trucks, and sport utility vehicles (SUVs), as well as Lincoln luxury vehicles. When it comes to pickup trucks, Ford is possibly the number one player and a household name stateside. In 2020, it sold 4.5 million vehicles.

The car maker reported fourth-quarter and full-year results in early February. Revenue fell 9% year-over-year to $33.2 billion during Q4. And GAAP net loss reached $2.79 billion compared to net loss of $1.67 billion in the prior year quarter.

However, adjusted diluted earnings per share (EPS) was above market expectations at 34 cents. Ford generated $1.9 billion in adjusted free cash flow during the quarter, ending the year with $31 billion in cash and nearly $47 billion in total liquidity.

“The transformation of Ford is happening and so is our leadership of the EV revolution and development of autonomous driving,” CEO Jim Farley said. “We’re now allocating a combined $29 billion in capital and tremendous talent to these two areas, and bringing customers high-volume, connected electric SUVs, commercial vans and pickup trucks.”

Most analysts concurred the firm delivered a robust quarter. Yet, the global shortage of computer chips has forced Ford to cut production in North America. Management has indicated the situation could lead to a $1 billion to $2.5 billion fall in its earnings during 2021. While working with suppliers, the company is expected to take proactive steps, such as shifting chips to more profitable lines — like its electric vehicles.

Despite potential short-term headwinds, Ford has a solid path to be successful in its EV transition. Ford’s forward price-earnings (P/E) and price-sales (P/S) ratios stand at 11.64 and 0.4, respectively. BY comparison, the respective figures for Tesla (NASDAQ:TSLA) for the same measures are 172.41 and 24.03.

Next is another established car maker, namely the Detroit, Michigan-based General Motors. The group is well-known for its iconic brands, including Buick, Cadillac, Chevrolet and GMC. In 2020, its Chevrolet Silverado was one of the top selling vehicles. Management is investing heavily in electric and autonomous vehicles. As GM converts more of its plants to EV manufacturing, the expectation is for the group to be fully electric by 2035.

Moreover, General Motors reported strong 2020 full-year and fourth-quarter earnings in February. Revenue increased to $37.5 billion, compared to $30.8 billion in the same quarter of the previous year. Net income was $2.85 billion. A year ago, it had been a net loss of $194 million. Adjusted earnings per diluted share was $1.93, compared to 16 cents in the prior year quarter. Adjusted automotive free cash flow was $3.43 billion during the quarter.

“Today, GM announced strong financial performance for the fourth quarter and full year of 2020, including several fourth-quarter records for operating results, and a record year for GM Financial.” CEO Mary Barra said. “…We are excited that our commitment to an all-electric future is changing how people think about GM.”

General Motors has recently reduced production at four plants due to the global chip shortage. “We are currently assessing the overall impact, but our focus is to keep producing our most in-demand products…,” management said.

GM stocks’ forward P/E and P/S ratios stand at 10.70 and 0.66, respectively. Like Ford, the valuation is not expensive. However, given how much the shares have soared since the second half of 2020, a potential decline below $50 is possible.

Our next choice, an exchange-traded fund (ETF), is an indirect short play on the shortage of chips. Over the past 12 months, several segments benefited from increased EV sales. One of them was energy storage in batteries. EVs and other items that rely on alternative energy need a steady supply of energy. That is why batteries come into play.

In turn, the Global X Lithium & Battery Tech ETF provides exposure to firms in the lithium cycle, i.e., from mining and refining the metal to battery production. Lithium is regarded as crucial in the battery space as it is more advantageous than the traditional lead-acid batteries.

LIT, which tracks the returns of the Solactive Global Lithium Index, currently has 40 stocks. and its net assets stand at $2.81 billion. Several of the leading stocks in the fund are Albemarle (NYSE:ALB), Ganfeng Lithium (OTCMKTS:GNENF), Samsung SDI, Panasonic (OTCMKTS:PCRFY), and BYD (OTCMKTS:BYDDY).

As far as sectors are concerned, Materials tops the list with 40.4%. Next in line are Industrials (30.1%) and Consumer Discretionary (14.97%). Over 40% of the businesses come from China. Then, firms from the U.S., South Korea, Japan and Australia make up the roster.

Japanese car maker Honda Motor is also well-known for its motorcycle, power products and financial services segments. Also, Honda and General Motors have been teaming up to develop EVs.

Honda announced its consolidated financial results last month for the third quarter and the fiscal nine-month period ended Dec. 31, 2020. It reported better-than-expected results for the October-December quarter. Consolidated sales revenue for the quarter was $36.05 billion. Operating profit increased by 67% to $2.65 billion from the same period last year. Also, profit for the quarter increased by 144% to $2.86 billion. And EPS stood at $1.57.

HMC stock’s forward P/E and P/S ratios stand at 8.55 and 0.43, respectively. A potential decline toward the $27.5 level would improve the margin of safety for buy-and-hold investors.

From Japan, we move to China, where our next stock, Nio, is based. Touted as the “Tesla of China,” the car maker has been one of the early movers in the country’s premium EV market.

“NIO concluded a transformational 2020 with a new quarterly delivery record of 17,353 vehicles in the fourth quarter of 2020. The strong momentum has continued in 2021 as we achieved a historic monthly delivery of 7,225 vehicles in January and a resilient delivery of 5,578 vehicles in February, representing strong 352% and 689% year-over-year growth, respectively,” CEO William Bin Li said.

Nio stock’s trajectory in the past year has been nothing short of spectacular. Currently, China remains the world’s largest EV market. And in 2021, EV sales are expected to rise more than 30% to 1.8 million units in the country, according to the China Association of Automobile Manufacturers.

Right now, price-book (P/B) and P/S ratios for the shares are 17.19 and 21.79, respectively. Nio decreased its production capacity in the second quarter from 10,000 to 7,500 vehicles a month due to the chip shortage. And if you are already worried about Nio stock’s overstretched valuation levels, then you might also be quite concerned with this expected decline. A potential fall toward $33 is possible in the coming weeks.

Japan-based Nissan Motor is well-known for its automobiles. Each year, it sells about 4 million vehicles worldwide. Its core markets include the U.S, Japan and China.

In addition, it has an important alliance with the French car group Renault (OTCMKTS:RNLSY). And annual sales of the combined Renault-Nissan Alliance reach 10 million. As a result, the alliance is one of the top automakers globally. Nissan is 43.4% owned by French automaker Renault, while Nissan owns 15% of Renault.

Due to the chip shortage, Nissan is cutting production of the Note compact car in Japan. It is also making several adjustments stateside. “We are mitigating the impact if the semiconductor shortage and doing our best to minimize the negative impact,” CEO Makoto Uchida said.

Therefore, it is unlikely that the company will grow revenues in the near-term. And that fact should raise questions for Nissan shareholders. Many analysts have already expressed concern about the group’s poor performance that has led to an over-leveraged balance sheet. In addition, Nissan is not a big player in the EV space. Being a latecomer in the EV transition will not help the Nissan share price, either.

Nissan’s forward P/E and P/S ratios of 33.67 and 0.31 point to an overstretched valuation level. I see little positive catalyst that might justify buying NSANY stock at this point.

New ETFs, especially with a thematic focus, have been hot in the past year. Our next discussion centers around an actively-managed fund recently announced by Simplify Asset Management.

It typically uses out-of-the-money (OTM) options, which would be suited to capture the extreme (or “tail”) events in the underlying securities. If the underlying asset has a big move, then the options are likely to see high returns.

Fund managers’ chosen company in the sector is Tesla, as they regard the company to be currently undervalued. The automaker is VCAR’s top holding, with about 25% target allocation, split between a 15% stock position and a 10% call option position. However, these amounts might change. For example, currently, the fund’s 14.96% is in Tesla stock, and 7.64% is in Tesla out-of-the-money (OTM) call options.

In addition to TSLA stock, the ETF has invested in Invesco QQQ Trust (NASDAQ:QQQ) and the Invesco NASDAQ Next Gen 100 ETF (NASDAQ:QQQJ). The respective allocations are 41.48% and 33.62%. InvestorPlace.com readers would be well familiar with QQQ, which tracks the returns of the companies in the NASDAQ 100 index. QQQJ, on the other hand, invests in the 101st to the 200th largest companies listed on the NASDAQ exchange.

In addition to these long positions in Tesla, QQQ, and QQQJ, this actively-managed fund buys OTM put options to potentially protect the fund from a broad market selloff, especially in tech shares. The current OTM put options, which make up 2.22% of the fund, are on the NASDAQ 100 index, with various expiration dates in 2021. The rest of the fund is in cash (0.10%).

The main aim of a fund with such a call and put option strategy is to capture the big up moves in Tesla and the big down moves in tech shares. VCAR began trading in late December 2020 and currently has close to $2.23 million under management. In other words, it is a young and small fund without much trading history. Year-to-date, the ETF is down nearly 8%.

Those investors who believe Tesla as well as the broader tech market is overvalued might consider selling the ETF. Since the start of the year, Tesla is down 2.3%. Similarly, QQQ has also fallen b less than 1% and QQQJ is up 7.1%.

On the date of publication, Tezcan Gecgil did not have (either directly or indirectly) any positions in the securities mentioned in this article.

Tezcan Gecgil has worked in investment management for over two decades in the U.S. and U.K. In addition to formal higher education in the field, she has also completed all 3 levels of the Chartered Market Technician (CMT) examination. Her passion is for options trading based on technical analysis of fundamentally strong companies. She especially enjoys setting up weekly covered calls for income generation.