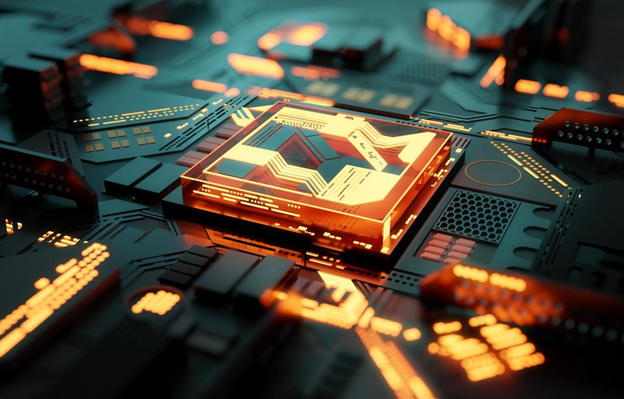 Quantum computing stocks could have quite a year in store.

Electric vehicle (EV) manufacturers are exploring new ways to optimize batteries to continue pushing the needle for the industry. Researchers are looking for ways to test out new chemistries in hopes of creating batteries that last longer and charge faster. Quantum computing seems to have the solutions to the plight of EV producers, making quantum computing stocks as relevant as ever.

Quantum computing uses quantum mechanics to effectively store data and perform complex calculations in a fraction of the time it would take today’s supercomputers. The industry is still in its nascency, and firms are already applying their computational powers to find solutions to some of humankind’s biggest problems.

Automotive companies are among that select group and have struck partnerships with some of the biggest names in the sector to apply the phenomenon to battery chemistry research. It’s a salivating prospect for EV and quantum computing stock investors as both industries could feed off each other and create a lot of wealth in the future.

International Business Machines (NYSE:IBM)  is one of the few dinosaurs in the tech space that still remains relevant after operating for more than 100 years. On the face of it, you might not think it’s one of the quantum computing stocks to keep your eye on, but it is.

Though it started as a hardware giant, it has effectively transitioned into high-growth areas such as cloud and quantum computing. Its foray into these profitable verticals has reinvigorated the business and underpins an incredible outlook.

IBM’s move into quantum computing has attracted attention from some of the biggest names in the automotive space. IBM partnered with German auto-titan Mercedes-Benz. The goal is to understand the chemistry of a lithium-ion battery to shorten development times.

Furthermore, IBM is also working with one of the leading electric trucks manufacturer, Daimler. One of IBM’s top executives, Jurgen Braun, states that Daimler is effectively using the company’s quantum computing capabilities to reduce EV costs.

The bulk of the cost with an EV relates to batteries, and quantum computing will help explore new ways to limit costs.

Alphabet (NASDAQ:GOOG, NASDAQ:GOOGL) is the parent company behind Google, the world’s most popular search engine. It’s also one of the quantum computing stocks with a great future.

Google has spread its tentacles in a wide variety of businesses in the tech space, but quantum computing appears to be one of its biggest priorities. It claimed a breakthrough in quantum computing research when it solved a complex problem in minutes with a quantum computer.

The tech giant plans to invest truckloads of cash in developing the technology over the next 1o years. Moreover, it aims to have a “useful, error-corrected quantum computer” by 2030. It hopes that the technologies could solve a variety of applications and potentially solve the world’s most pressing issues.

A few years ago, Google turned heads with its research partners in the quantum computing field with Volkswagen Group. The goal was to make significant progress in continuing the development of traffic optimization, improve its artificial intelligence competencies, and explore new material structures to improve EV battery performance.

“We see great potential for quantum computing across our entire business,” said According to the director of Volkswagen’s Data Lab in Munich, Florian Neukart.

In the past year, the stock tooks quite a hammering and shed more than 60% of its value in the past year. It still boasts a market cap of over $1.1 billion, but that seems reasonable considering a massive projected addressable market of close to $65 billion.

Moreover, the company is backed by some of the leading government and academic research entities.

Hyundai recently partnered with IonQ on an EV research project. The partnership entails the development of new algorithms to study lithium compounds and the resultant reactions involved in battery chemistry. It would involve the development of the most robust battery model yet developed on quantum computers.

Chemistry simulations enable firms to study and adjust battery durability, capacity, safety, and discharge cycles. IONQ is still early in what could be an illustrious growth story; hence, it’s an ideal time to pick it up for the long haul.

On the date of publication, Muslim Farooque did not have (either directly or indirectly) any positions in the securities mentioned in this article. The opinions expressed in this article are those of the writer, subject to the InvestorPlace.com Publishing Guidelines

Muslim Farooque is a keen investor and an optimist at heart. A life-long gamer and tech enthusiast, he has a particular affinity for analyzing technology stocks. Muslim holds a bachelor’s of science degree in applied accounting from Oxford Brookes University.

Why Investors Shouldn’t Rush to Buy Lidar Leader LAZR Stock
Pimco’s Ivascyn sees a mild recession ahead and several investing opportunities
How Much Does It Cost to Have a Baby in America?
The 3 Best Bank Stocks to Buy Now
Setting Our Sights for 2023