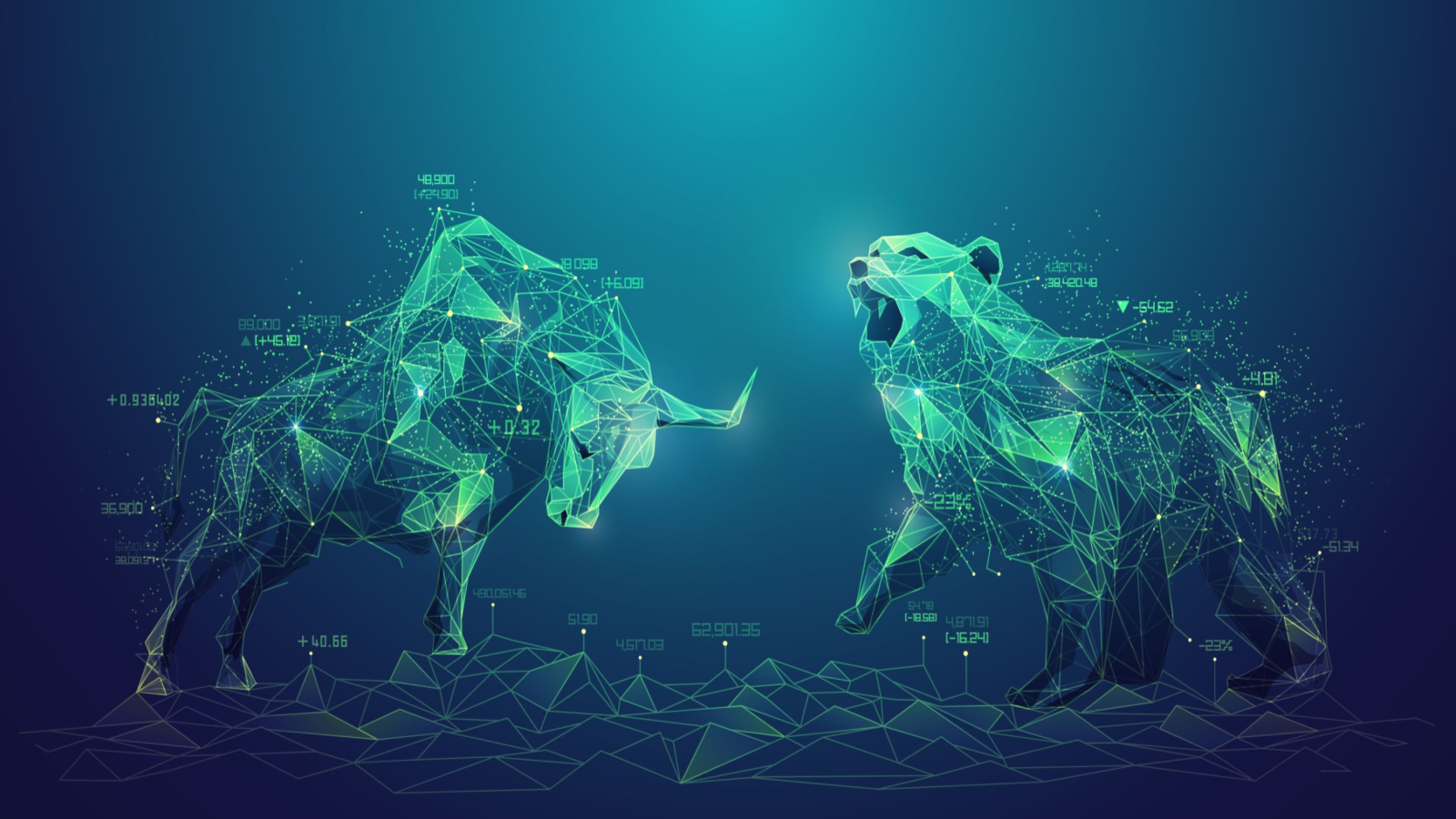 [Editor’s note: “Find Bear Market Shelter and Mega Upside With ‘Divergence’ Stocks” was previously published in May 2022. It has since been updated to include the most relevant information available.]

This year has been defined by bear market turmoil.

The reality is that the entire global financial market is built on the back of super low interest rates. If those rates go way higher in 2022, stocks are due for more pain.

But if you think that’s a reason to sell everything, let me ask you this. Did you know that a certain group of stocks has a proven history of soaring during market crashes?

It’s true. And we uncovered those stocks thanks to a rare market phenomenon we recently discovered called the “divergence” — a phenomenon that repeatedly appears during bear markets and scores savvy investors huge returns (even if the broader markets keep crashing).

This phenomenon just started to appear recently for the first time since 2008. It’s going to score savvy investors huge returns. And investors who miss this opportunity could get crushed by a bear market.

Here’s what I’m talking about.

Divergence Stocks Soar Even in a Bear Market

As many of you know, we’ve been studying this divergence phenomenon for months now.

To recap, the divergence is not something you’ve probably ever heard of elsewhere. It’s this ultra-rare phenomenon, which occurs only about once a decade, wherein certain individual stock prices diverge significantly from their true stock prices, as determined by the company’s fundamentals.

The divergences always end with those individual stocks snapping back to their true stock prices, resulting in enormous returns for investors who bought during the divergence window.

But one of the most interesting and relevant discoveries we’ve made is that divergence stocks tend to soar even if the broader markets crash.

Take, for example, the Great Divergence of 2001. At the time, internet stocks were undergoing an enormous divergence, wherein their stock prices were collapsing yet many of them still had rapidly growing revenues and earnings.

A few stocks that experienced this divergence phenomenon in 2001 were Amazon (AMZN), F5 Networks (FFIV), and eBay (EBAY).

Look what happened to those stocks throughout 2001 and 2002. While the broader market kept reeling during that period — the Dow Jones dropped 16%, the S&P 500 dropped 24%, and the Nasdaq collapsed 27% — these divergence stocks soared by an average of more than 90%. While folks invested in the market lost more than 20% of their wealth, divergence stock investors basically doubled their money! 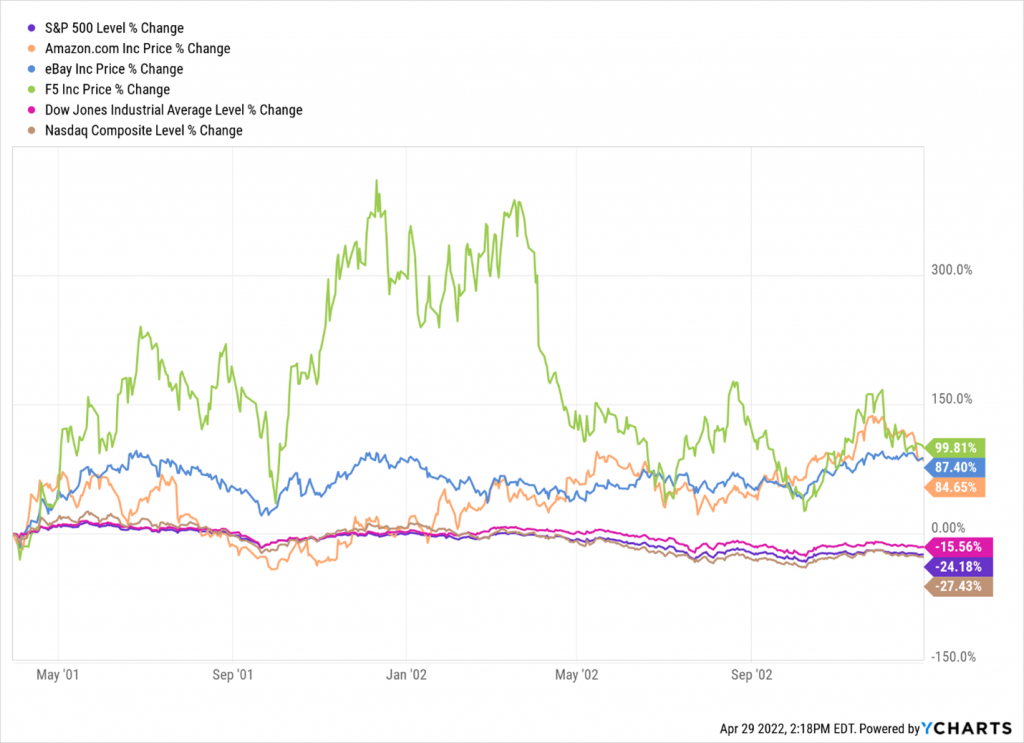 But this isn’t an isolated example.

It is a repeating pattern that proves the bear market protection that divergence stocks provide.

Let’s zoom to the Great Divergence of 2008. At the time, all stocks were crashing due to fallout from the Great Financial Crisis. But certain stocks were crashing at the same time their companies were rapidly growing their revenues and earnings. Some examples included Amazon, Netflix (NFLX), and Booking (BKNG).

This is the power of the divergence. It is such a powerful market phenomenon that is has the ability to send a small group of divergence stocks significantly higher in a short amount of time even if the market crashes.

From an investment perspective, there’s no better value proposition than that.

But divergence stocks aren’t just about scoring huge near-term returns. These stocks have a track record of scoring investors 1,200%-plus returns in the long run, too.

The Best Buying Opportunity in History?

And I’d make that argument because the data would have my back.

Per our analysis, there have been three Great Divergences over the past 40 years: 1988, 2001, and 2008. Each time, they offered investors the chance to buy world-changing companies at blockbuster discounts.

Obviously, those are fantastic long-term investments. But, to hammer the point, let’s go over the numbers.

Based on data from over 20 stocks through three different divergences stretched over 40 years, we’ve found that the average forward 12-month return in these divergence stocks was about 135% across all the examples. Forward five-year returns were almost 1,000%. Forward 10-year returns were in excess of 3,000%. And forward lifetime returns were more than 20,000%! 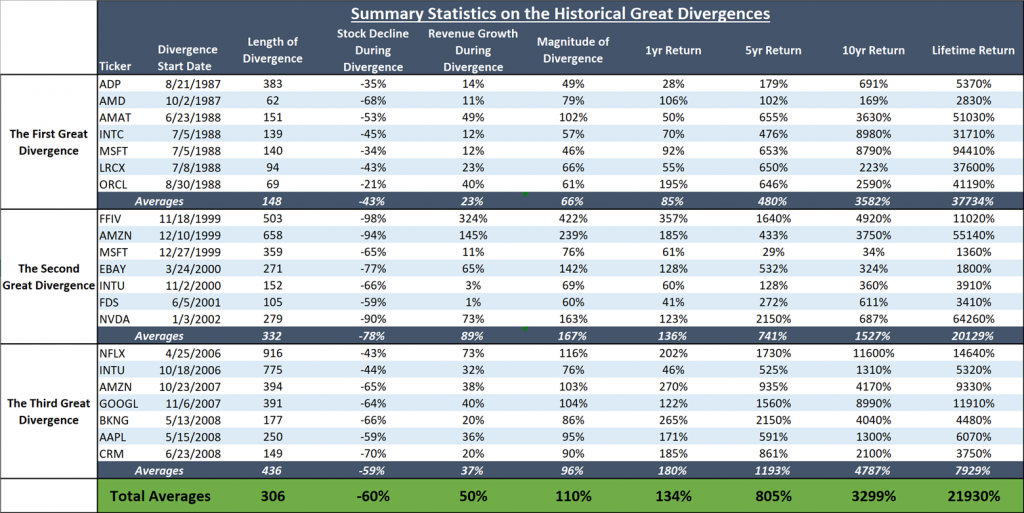 So, we’re not just talking about stocks to buy today and sell tomorrow.

Yes, divergence stocks tend to double in 12 months. But they also tend to rise 10X in five years, and more than 30X in 10 years.

We’re talking about stocks to buy today and hold forever — stocks with the chance to turn meager $10,000 investments into multi-million-dollar paydays.

But that chance only comes around about every so often when the divergence phenomenon emerges.

Well, folks, today another Great Divergence is emerging. And we’re ready to capitalize on it for huge returns.

We sit on the precipice of a truly unprecedented money-making opportunity.

These are opportunities that could simultaneously soar and offer you protection from any bear market turmoil.

Can you see why I’m so excited right now? It doesn’t get any better than this!

Throughout my stock-picking career, wherein I jam-packed more than twenty 10X picks into just a few years, I’ve never been more bullish than I am right now.

And I really don’t want you to miss out on this opportunity.

Our models suggest the perfect moment to buy could come at any time. When it does, we will immediately broadcast our message — and reveal of top divergence stocks to buy.

Needless to say, you should sign up for that alert. If you don’t, you could miss out on one of the biggest opportunities in stock market history.

Instead, see how you can turn today’s market pain into your personal fortune.